FLORA FORCE® CINNAMON capsules have not been evaluated by the Medicines Control Council. This medicine is not intended to diagnose, treat, cure or prevent any disease.

INDICATIONS:
FLORA FORCE® CINNAMON is a traditional medicine indicated for the maintenance of healthy metabolism and digestion.

The use of FLORA FORCE® CINNAMON capsules in children and adolescents under 18 years of age is not recommended due to lack of adequate data (see “DOSAGE AND DIRECTIONS FOR USE”).

The dose of the antidiabetic medications may need to be adjusted when taken in conjunction with FLORA FORCE® CINNAMON capsules.

DOSAGE AND DIRECTIONS FOR USE:
The recommended daily dose should not be exceeded.

Adults (18 years and older):
Take 2 capsules daily or as prescribed.

Children (under 18 years of age):
Not recommended for use (see “WARNINGS AND SPECIAL PRECAUTIONS”)

SIDE-EFFECS:
Orally, no adverse reactions tend to occur with the use of the cinnamon bark; however, cinnamon oil can irritate mucous membranes and is a skin irritant and sensitizer.

KNOWN SYMPTOMS OF OVERDOSAGE AND PARTICULARS OF ITS TREATMENT:
None known. Contact a poison control centre in area.

STORAGE INSTRUCTIONS:
Store at or below 25ºC.
Protect from light.
KEEP OUT OF REACH OF CHILDREN. 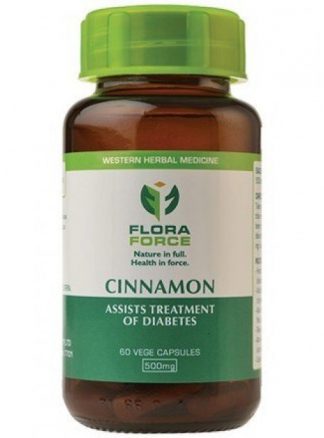