Marine collagen is a fibrous protein extracted from the scales or skin of saltwater fish, including cod and salmon. In recent years, preliminary animal and clinical studies have found that this collagen possesses medicinal properties that can help promote human health and well-being.

Marine collagen has antioxidant properties that have been used in skin-care products to prevent or even repair the damage caused by environmental factors, such as UV rays and low humidity, as well as damage associated with the aging process. Researchers at Beijing University’s School of Public Health in China explored the effects of marine collagen peptides on the skin of aging mice. In findings published in the April 2008 issue of the Chinese Journal of Preventive Medicine, the researchers reported that test animals given oral doses of marine collagen peptides showed a significant thickening of their epidermis, as compared with mice in the control group. Researchers also reported a sharp increase in the number and activity of fibroblasts in the skin of mice treated with marine collagen. Fibroblasts are cells that play a key role in the creation of new connective tissue, such as skin.

Another research group at Beijing University’s School of Public Health conducted an animal study to determine what, if any, effect marine collagen peptides had on bone development. Specifically, they looked at how peptide supplementation affected the development of long bones in growing rats. They used marine collagen extracted from the scales of chum salmon and focused on femur development in test animals of both sexes. Their study, published in the July 2010 issue of the Journal of the Science of Food and Agriculture, concluded that marine collagen supplements significantly increased the size, mineral density and toughness of femurs in male rats but produced less impressive results in female test animals. They suggested more and broader studies to confirm marine collagen’s effects on other animal and human subjects.

It also has been shown in clinical studies to lower LDL (bad cholesterol) and increase HDL (good cholesterol). It is a pure protein source that does not contain any carbs, sugar or fat. Daily intake of Marine Collagen may help supress one’s appetite by keeping you feeling fuller for longer, thus promoting weight loss.

Benefits:
– Helps the absorption of Calcium and other minerals that are essential to bone strength
– Improves bone density
– Replenish your skin
– Help reverse ageing 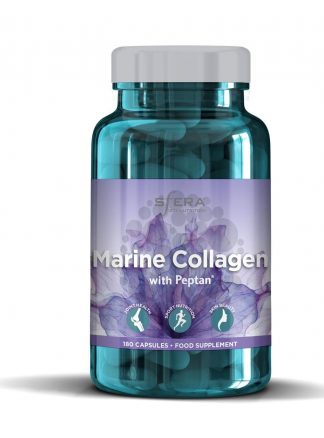