Sceletium tortuosum is one of the oldest mesembs known to the western world.

Sceletium tortuosum contains mesembrine and the related alkaloids mesembranol and mesembranone. Mesembrine is known for its effects on the central nervous system. The compounds also act as serotonin-uptake inhibitors, and in specified doses act as anti-depressants, minor tranquilizers and anxiolytics used in the treatment of mild to moderate depression, psychological and psychiatric disorders where anxiety is present, major depressive episodes, alcohol and drug dependence, bulimia nervosa, and obsessive-compulsive disorders

1: What is Sceletium and what’s it used for?

Sceletium is a traditional herbal medicine used as a natural sedative and anti-depressant. Its efficacy is pharmacologically proven. It’s beneficial for the natural treatment of all ailments related to serotonin deficiency such as depression, anxiety, insomnia and mental tiredness. Published case reports by doctors, psychiatrists and psychologists indicate clinical efficacy in treating depression, including major depressive disorders, anxiety, social phobia and low libido. It’s also used to facilitate the psychotherapeutic process and for support in alcoholism rehabilitation and quitting smoking.

2. How does Sceletium work?
Mesembrine is one of the main active ingredients in Sceletium. It’s a potent serotonin-reuptake inhibitor (SSRI) which means that it is used to increase the total amount of serotonin available to your brain. More serotonin is associated with a happier, more relaxed disposition, clear thinking and balanced mood.

4. Possible side effects:
Contraindications: Sceletium is contraindicated when taking psychiatric medication, including antipsychotic drugs, monoamine oxidase inhibitors and benzodiazepines.
Special warnings: None. Can be safely consumed when used appropriately.
Interactions: None know.

Ethnic use safety data: The plant is not hallucinogenic and no adverse effects have been documented. There is no evidence of physical or psychological dependency.

There are no reviews yet. 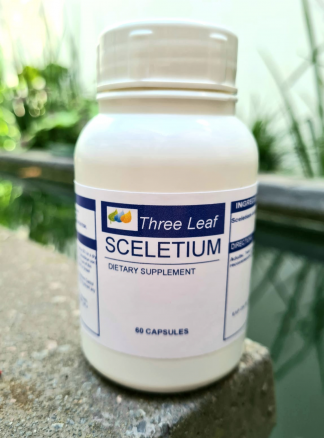 Hello!
Feel free to reach to one of our representative below if you need help.