Salvestrols are naturally occurring plant derived compounds (phytonutrients). Salvestrols are essential for wellbeing and because they cannot be made in the body they must therefore be supplied through our diet.

As a group, they are chemically unrelated substances except for the similar manner in which they confer their benefits, that is, as a result of their action with the CYP1B1 enzyme. This CYP1B1 enzyme is over expressed in malfunctioning cells and not present in normal healthy cells. The metabolites produced through metabolism of Salvestrols by the CYP1B1 enzyme result in the suppression and death of these malfunctioning or diseased cells.

Salvestrols are natural anticancer molecules present in the human diet. They are activated inside tumour cells to anticancer metabolites that destroy the cancer from within. The enzyme that activates them is called Beta Salvestrol Activase also known as CYP1B1. This enzyme is expressed in every form of human cancer. Each cancer cell has the CYP1B1 enzyme that has been likened to a Trojan Horse within the tumour cell. When the salvestrols reach the tumour they encounter the trojan horse and release a stream of deadly chemicals killing the tumour cells and destroying the tumour. There are 100 salvestrols in total in five different classes alpha, beta, gamma, delta and omega. It is the omega salvestrols that ultimately destroy the tumour. When salvestrols reach the liver they are salvaged and returned to the bloodstream for re-delivery to the tumour, hence the name salvestrols from the Latin word “salve” which means “to save”. The alpha salvestrols are present in red fruits such as grapes and one example is the red wine constituent resveratrol. Resveratrol is salvestrol S30 and 10 others are important in the diet. Salvestrol Q40 is the most potent of these and is found in high concentrations in brassica vegetables and citrus fruit such as oranges. Salvestrol Therapy is the use of salvestrols to combat cancer. For Salvestrol therapy a high strength supplement such as Salvestrol Platinum (2000 points) is taken 3 times daily after meals. Published case studies have shown Salvestrols to be effective against a wide variety of cancers including breast, brain, bladder, cervical, colon, liver, skin, ovarian, testicular, prostate, and lung cancer.

Salvestrols where discovered in 1998 as a result of the combined research of Professor Dan Burke, a pharmacologist, and Professor Gerry Potter, Professor of Medicinal Chemistry and Director of the Cancer Drug Discovery Group at Leicester’s De Montfort University. Professor Potter had spent almost 20 years designing synthetic cancer drugs but realised along the way that plants have similar chemicals that could prove to be beneficial in the treatment of cancer.

The collaboration of the two research directors-Professors Dan Burke and Gerry Potter-resulted in the discovery that a group of natural dietary compounds-Salvestrols-exerted similar effects to those they were seeking to exact by the use of synthetic pharmaceuticals, and as a result their focus now lies entirely within the realm of natural products.

Salvestrol is a new name Potter coined to describe this group of natural compounds from the Latin word salve, meaning ‘to save’.

Salvestrols are a spinout from a drug discovery programme which has already delivered several major pharmaceutical products considered to be key in their class and others which are currently undergoing clinical trials.

The question can be asked that if Salvestrols are naturally occurring in plants and vegetable and thus in our diet, then why should one supplement with them?

The reality is that our modern diet is generally very poor nutritionally. While we certainly do not lack calories in our diet we do lack good nutritious food. It is estimated that we consume 10% of the Salvestrols we did 100 years ago. This is partly because very few people eat sufficient quantities of fruit and vegetable consistently each day but then even when one does due to modern farming methods they are nutritionally not of the same quality they once were.

Salvestrols are produced by the plant to protect themselves from attack by pests and disease, and as such are often expressed in specific parts of the plant where the attack is likely to occur, such as the skin of a fruit, for example. However, modern day crop husbandry and food production techniques cause the levels of these types of compounds expressed by the plant to be significantly reduced. The use of fungicides, for example, means that the plant does not need to produce its own anti-fungal agents at the levels which would normally be needed, since the stimulus to do so which would be initiated by the attacking fungus has been significantly reduced or eradicated by the use of the fungicide.

Plant variety, growing, harvesting and storage conditions have been shown to affect the levels of phytoalexins and Salvestrols in plants.

Finally, many processed versions of the foods, especially fruits have the bitter components such as Salvestrols, removed from them during the manufacturing process to make them sweeter and more attractive to modern day tastes. Modern day fruit has often been genetically modified in order to remove Salvestrols to give the fruit a sweeter taste profile.

Even though we are being urged to eat more fresh fruit and vegetables, unless you eat organic you are unlikely to get sufficient Salvestrols from your diet. Organic fruit has been found to contain 10 times the quantity of Salvestrols than non-organic.

The levels of Salvestrols in a typical “5 portion a day” basket of non-organic fruit and vegetables from a supermarket have been measured and found to contain only 10% of the estimated daily dietary requirement.

So eating adequate amounts of commercially available fruit and vegetables will not provide the essential nutrients the body needs. Even an organic diet may be inadequate since the varieties of fruit and vegetable commercially available may be types that are low in Salvestrols. It can be difficult to find food that is high in salvestrols. Different salvestrols are found in varying concentrations and levels of biological activity in fruits like strawberries, oranges, grapes and even cocoa. There are over 550 varieties of oranges, over 200 varieties of strawberries and grapes, and 450 varieties of cocoa bean! All with different levels of Salvestrols, and each with different levels of biological activity.

Examining other likely sources of Salvestrols in the western diet, such as fruit juices, other beverages and processed foods, Salvestrols were again found to be largely absent. In the case of some fruit juices where they should have been present, for example in cranberry juice, it was discovered that the Salvestrols were removed during processing in order to make the product taste sweeter, as most Salvestrols have a sharp or bitter taste.

“It is currently very difficult to get an adequate intake of Salvestrols without taking a supplement but researchers are working with farmers and agronomists to establish growing conditions that can ensure high levels of Salvestrols in crops. They are also producing a directory of organic foods rich in salvestrols so that people can balance their intake of Salvestrols through a combination of diet and supplementation.” Please add this to the end of the paragraph “ For therapeutic use one would need to consume far greater quantities of Salvestrols on a consistent day to day bases than can be supplied even through a well-constructed and balanced organic diet. Thus the use of supplemental Salvestrols becomes necessary.” 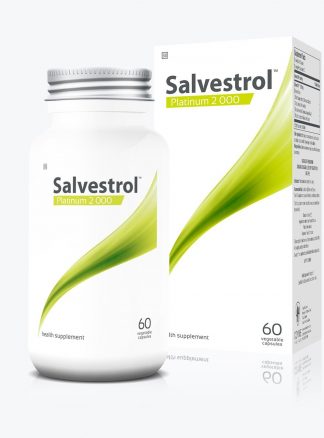 You're viewing: Salvestrol Platinum R990.00
Rated 5.00 out of 5
Add to Cart
Click to Call
+ +
Hello!
Feel free to reach to one of our representative below if you need help.